Where do the Parties Stand on Child Care

Federal election 2019: Where do the major parties stand on family and child care?

Although household income is on the rise in Canada, many families are still feeling strapped for cash. Here is a look at the promises the major parties have made to ease the financial burdens of raising a family.

Affordability has been a recurring theme in this election campaign, as federal party leaders court middle-class voters with promises to ease the financial burdens of raising a family. These promises, aimed at parents of young children, range from tax credits, tax cuts and increased child and parental benefits to the creation of a universal child care system.

Although household income is on the rise in Canada, many families are still feeling strapped for cash. Besides the rising cost of housing, child care fees are a major source of financial pain, said Paul Kershaw, a policy professor at the University of British Columbia.

Due to its absence of a nation-wide, quality, affordable child care system, “Canada has been an international laggard for decades by comparison with other rich industrialized countries,” said Dr. Kershaw, founder of the national research and advocacy organization Generation Squeeze, which represents the interests of Canadians in their 20s, 30s and 40s. “It is one of the primary issues squeezing a younger demographic because child care often costs another rent- or mortgage-sized payment.”

Policy experts, such as Dr. Kershaw, say they are encouraged that affordable and accessible child care has made it onto the platforms of several of the major parties. But they warn even if these promises are carried out, it may take years before parents across the country actually see daycare costs decline and waiting lists shrink. 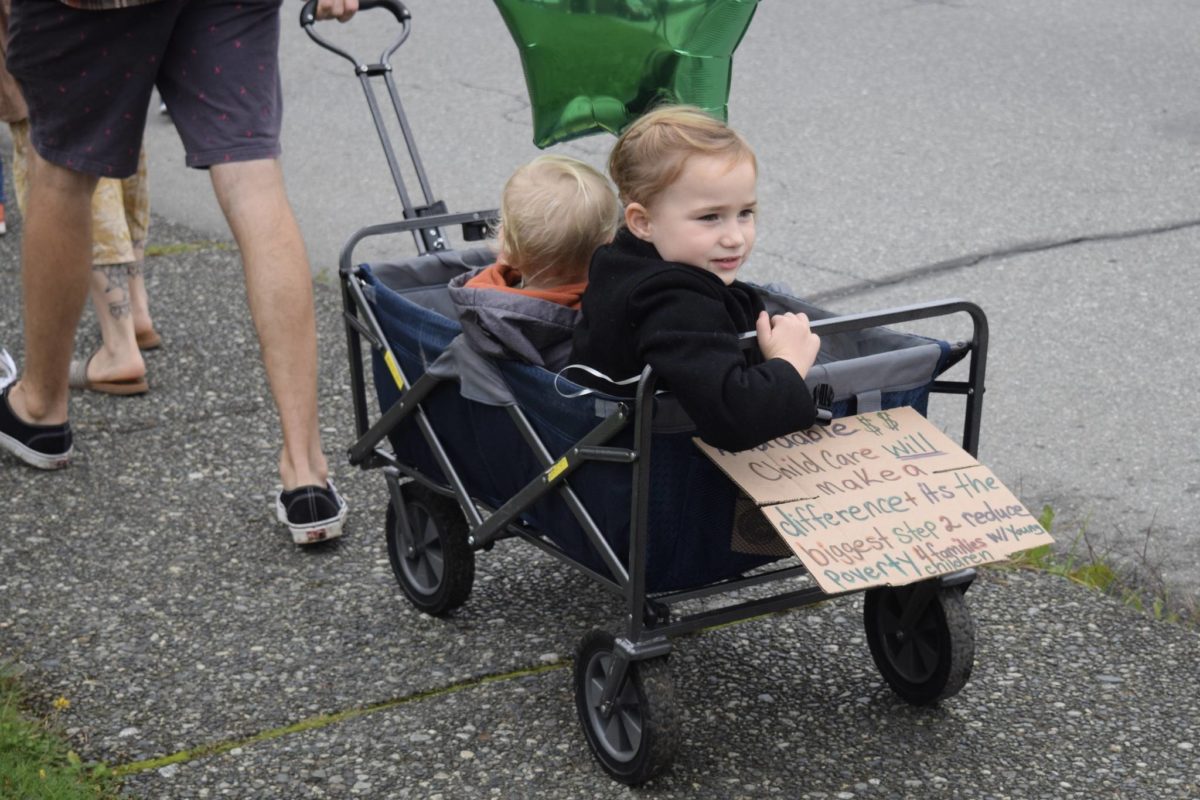 Dozens gathered at Wallace Street and Wood Avenue on Saturday, Oct. 5 before walking down to Gord Johns’ campaign office on 10th Avenue to send a message to the federal government that child care is an important issue for the community as a whole. Port Alberni was one of 21 communities across the province taking part in the brigade, bringing attention to the importance of maintaining current federal child care funding agreements—and growing them over time.

The message is especially important to get out during a federal election, explained organizer and educator Carrie Nahorney.

“[Funding] is decided through the province, how it’s going to be spent,” she explained. “But a huge chunk of this money comes federally.”

British Columbia, she said, currently receives $50 million annually from the federal government for child care. But educators are hoping to grow this in order to help B.C. fully implement the popular “$10 a Day” Child Care Plan.

If we’re serious about getting more women in executive roles, a universal childcare system is crucial

TEA NICOLA
CONTRIBUTED TO THE GLOBE AND MAIL
PUBLISHED OCTOBER 6, 2019

Tea Nicola is the CEO and co-founder of WealthBar, one of Canada’s leading online wealth management platforms. 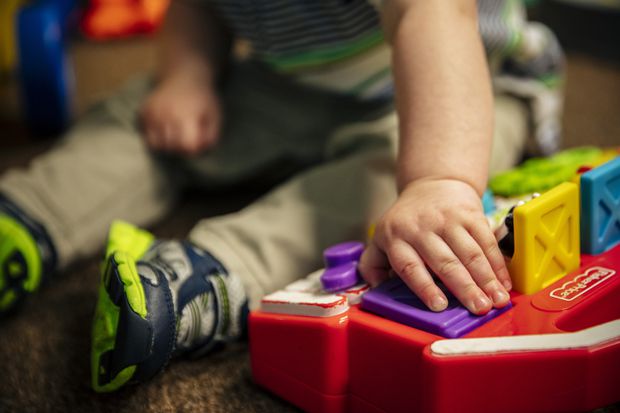 In the pages of this paper, Canada’s most powerful people have fiercely debated the issue of why women don’t climb the corporate ranks at the same rate as men. While I’m encouraged to see the topic get such priority, most conversations on the gender gap have overlooked a major root cause: Canadian women are being squeezed in their careers because of a lack of access to child care.

Canada has a daycare crisis. In cities such as Vancouver, Toronto and Calgary, families with young children are often spending nearly as much on daycare as they are on housing costs – a full third of their income. A single year of daycare for one child alone can cost the equivalent of four years of university tuition. Add another child and the cost becomes impossible.

Affording it is only half the battle. The other is securing a spot. Wait lists are so long that parents who add their name the day they find out they’re pregnant may not even get a spot before the child is off to kindergarten.

Parents rallied in 21 communities across B.C. Saturday to draw attention to an issue they want to see discussed on the campaign trail during this federal election: child care.

Dozens of people gathered for the Vancouver rally at Roundhouse Community Arts and Recreation Centre in Yaletown.

"We're really glad to say that three of the four major political parties have stepped up and made additional commitments beyond that $50 million," Gregson said. "We want child care to be visible and for whoever is elected on Oct. 21 to know we'll be holding them accountable for their child care promises."

Kate Spence attended the rally with her daughter, but she said even non-parents should be in favour of subsidized child care.

"Even if you're not a parent, your life will be affected by this," Spence said. "This is keeping people out of the workforce on all levels -- hospitality, tourism, you know, I know an anesthesiologist who's struggling to find care right now."

With additional investment from the federal government, programs like B.C.'s could be introduced and expanded across the country, Gregson said.

"We know there are tens of thousands of families across B.C. now that are benefiting from lower fees because of investments the provincial government is making, and if the federal government steps up, we know that that $10-a-day reality will be more widespread."

Stroller Brigades in BC

Parents and their supporters in 21 communities across British Columbia rallied on Saturday morning to call for a national child-care strategy.

The protesters, many of them with strollers in tow, want the federal government to provide affordable, universal child care for parents across the country.

"Everybody depends on somebody who depends on child care," said Sharon Gregson at the rally in Vancouver. She is an event organizer and provincial spokesperson for the $10 a day child-care plan in B.C.

"It's part of keeping our society functioning, people in the workforce and growing a healthy next generation."

Marches were held in Vancouver, Kelowna, Penticton, Campbell River and other communities around the province to draw attention to the issue during the lead-up to the upcoming federal election on Oct. 21.

The protesters specifically called for $10 a day child care and for better wages for early childhood educators.

Gregson says there are 575,000 children under 12 in B.C., but only 100,000 licensed child-care spaces. Child care is the second highest expense for families after housing, she added.

"We know that we need more spaces in British Columbia," Gregson said.

Gregson and other members of her group commended the provincial NDP government for its role in supporting affordable childcare in B.C., but they said it's time for the federal government to do its part.

A group of enthusiastic families and childcare workers gathered today at the Parkinson Rec Centre to raise awareness ahead of the federal election.

Armed with signs, balloons and whistles, the group marched all the way to the Kelowna Farmers’ and Crafters’ Market, stopping on the Highway 97 overpass to wave their signs at passing motorists.

The Stroller Brigade organizers are hoping that their march will make childcare visible as an important election issue. Although child care funding is managed by the provinces, a portion of that funding comes from the federal government.

“Together we need to ensure that those elected on October 21 support the $10 a Day Plan by protecting the $50 million BC now receives annually for child care – and committing to grow that amount over time,” said Childhood Connections.

The two candidates that attended spoke about their support for making improvements to childcare in the province.https://www.kelownanow.com/watercooler/news/news/Kelowna/Kelowna_Stroller_Brigade_marches_for_affordable_and_accessible_childcare%C2%A0/

Parents and tots protest for affordable childcare in Squamish

It’s a sunny Saturday in Squamish, and there are more strollers than usual being pushed through downtown.

On Oct. 5, around 50 parents — and at least 25 kids — formed a peaceful protest to call for improving childcare in Squamish. They joined 19 other B.C. communities who hosted stroller brigades for the cause. 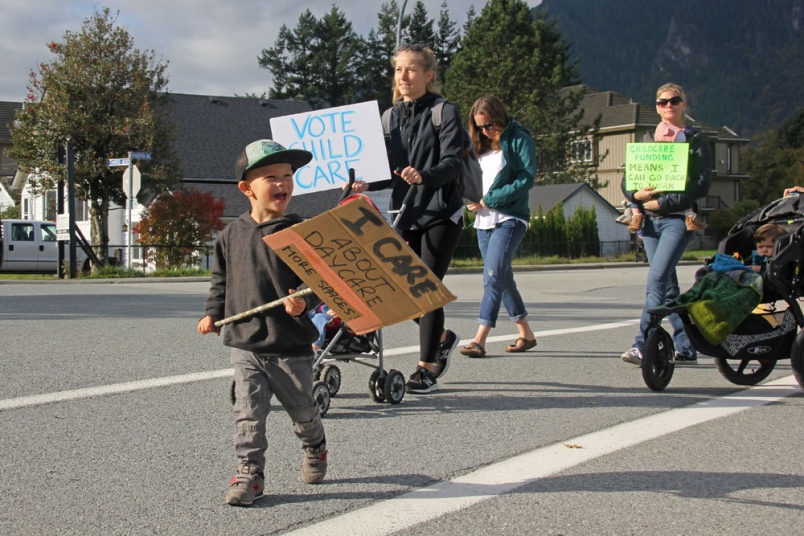 When it’s time for Serra Boten, the organizer behind Squamish’s brigade, to speak, she’s running after her young child. The group chuckles when she apologizes and quips, “I need childcare.” Even though the other parents laugh, it’s a serious issue in Squamish.

Several parents spoke at the event, including Kareena Harwood. A local mom with another one on the way, Harwood is also an early childhood educator (ECE).

“I can’t return to work, because there’s not space for my child. If I did find space, it is more than my paycheque. We need not only quality care, we need people who are qualified to care for your wonderful, lovely children — but we also need to pay rent and we can’t,” she told the crowd, calling for a living wage. “If I leave the workforce, that is eight of you that lose your care.”https://www.squamishchief.com/news/local-news/parents-and-tots-protest-for-affordable-childcare-in-squamish-1.23967952

Mayor Karen Elliott and Coun. John French were among the marching protestors, and addressed the collected crowd, calling for action from the provincial government.

Elliott shared her own concerns about daycare, recalling when she was first elected to council, but didn’t have daycare options during council meetings.

She also recommended writing to federal parties and election candidates to support the program.

Brigades to encourage people to vote in the federal election with early care and learning in mind.

The Coalition of Child Care Advocates of BC with the Early Childhood Educators of BC and The Waitlisted Project are coordinating province-wide “Stroller Brigades for Childcare” to encourage people to vote in the upcoming Federal election on Oct. 21 with early care and learning in mind.

Childcare advocates around the province are holding Stroller Brigades on the weekend but tather than holding one large community-wide Stroller Brigade, Campbell River-area childcare centres are being encouraged to hold their own Stroller Brigades at their locations on Monday, Oct. 7. Cari’s Infant & Toddler Centre is holding its Stroller Brigade at 10:30 a.m. on Monday and is inviting anyone to join them.