Some Vancouver parents pay over $2,000 a month for child care

As Vancouver parents compete for limited spaces, the sky's the limit for every-rising daycare costs 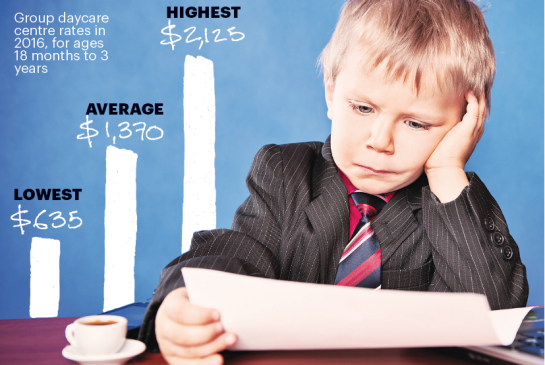 Vancouver families are struggling with a supply and demand child care conundrum — too few spaces are pushing fees into the stratosphere.

Currently 75 per cent of families who need child care are going without, said Pam Preston, executive director of Westcoast Child Care Resources. The cost of housing is one factor limiting the creation of spaces, especially in home daycares.

But the competition for scarce spots also means that home daycare providers are able to charge higher and higher fees.

“But the other trend we are seeing is that what is happening is that fees are going up.”

Fees are going up by around two per cent a year for all categories of child care, including licenced group daycare centres. For children aged 18 months to three years, fees for group centres in 2016 average $1,370 a month; for licence-not-required home daycares, the average was $$1,157 a month in 2015. Up to date figures are not yet available for licenced home daycares.

Those are average fees, but for Preston, the upper range of the fees are shocking: some parents are paying as much as $2,125 a month for a group centre, and as much as $1,910 for a home daycare. (Figures are for the 18 month to three years age range.)

“I think in family childcare, they look at the rate that the group childcare programs are charging and they think that they can charge the same,” Preston said, noting that home-based daycare providers are not paying the extra overhead of staff wages and other costs that group centres must cover.

“The parent is in a bad supply and demand situation.”

As tight as the daycare situation is, Preston said a City of Vancouver bylaw is making it even more difficult for new home daycares to open. The city requires all buildings being used as daycares — even houses — to have sprinkler systems, a more stringent requirement that what is in place in other municipalities.

“This issue alone has stopped people from going ahead and opening their licensed family care homes,” Preston said.

Pat Ryan, chief building official for the City of Vancouver, said the city works with home daycare providers to meet the requirement, but said sprinklers are important in reducing fire deaths.

While cutting red tape might seem like a solution to the limited number of spots, a recent move by the province to reduce the amount of outdoor play area needed for daycare — from seven square metres per child to six square metres — is being panned by child care advocates.

Rather than lowering standards, governments should adopt a comprehensive child care system that ensures all children have access to safe care, said Sharon Gregson, an advocate for a $10 a day daycare system for British Columbia, which would be structured more like the province’s public education system.