I put my son on a waitlist for care when I was seven weeks pregnant.

When the year of mat leave was over and I had to go back to work, my husband and I looked at each other and said “we need something to change.”

He left his full-time job to take a seasonal job, working 3 days per week. I worked 3-4 days per week. A babysitter came in 2 days a week. We were paying the babysitter more than we were making. It was definitely a losing proposition but we had to do it to keep our jobs.

We did that for 7 months until we got the call that the daycare had a space for our son, two years after first putting him on the waitlist. It started as a space for 1 day per week, but being on the internal list meant we had the first opportunity as more days became available. The care is great and is right on our street.

"We got the call that the daycare had a space for our son, two years after putting him on the waitlist"

I live and raise my son in Whistler, BC – a 12-month-per-year resort town that struggles to maintain labour to keep it running. People are living and working here on the edge of reality: it’s one of the most expensive communities in the country and there’s a huge diversity of pay grades.

Child care has been a problem in this town for many years. Right now, Whistler has only 3 child care centres and enough licensed spaces for 16% for all infants and toddlers who need it.

The care in these centres is wonderful and parents love it. I think that’s because people don’t get into Early Childhood Education work by accident. They are angels. It’s truly a calling. It’s the most important job in our country because they’re helping raise our children.

And it’s a really tough job in a profession that doesn’t pay enough. So the centres in Whistler, just like others, struggle to maintain staff.

This is our current reality. But in 2012, I saw Sharon Gregson present the $10aDay Child Care Plan and I’ve been following the Plan ever since. The plan will work. It will have the impact we need it to. It will also be self-funded, if we give it the chance, because of the positive economic impacts. I believe in it.

Together we can make affordable child care in BC a reality. Take action by supporting the $10aDay child care petition, and share this story with your friends & family on Facebook & Twitter. 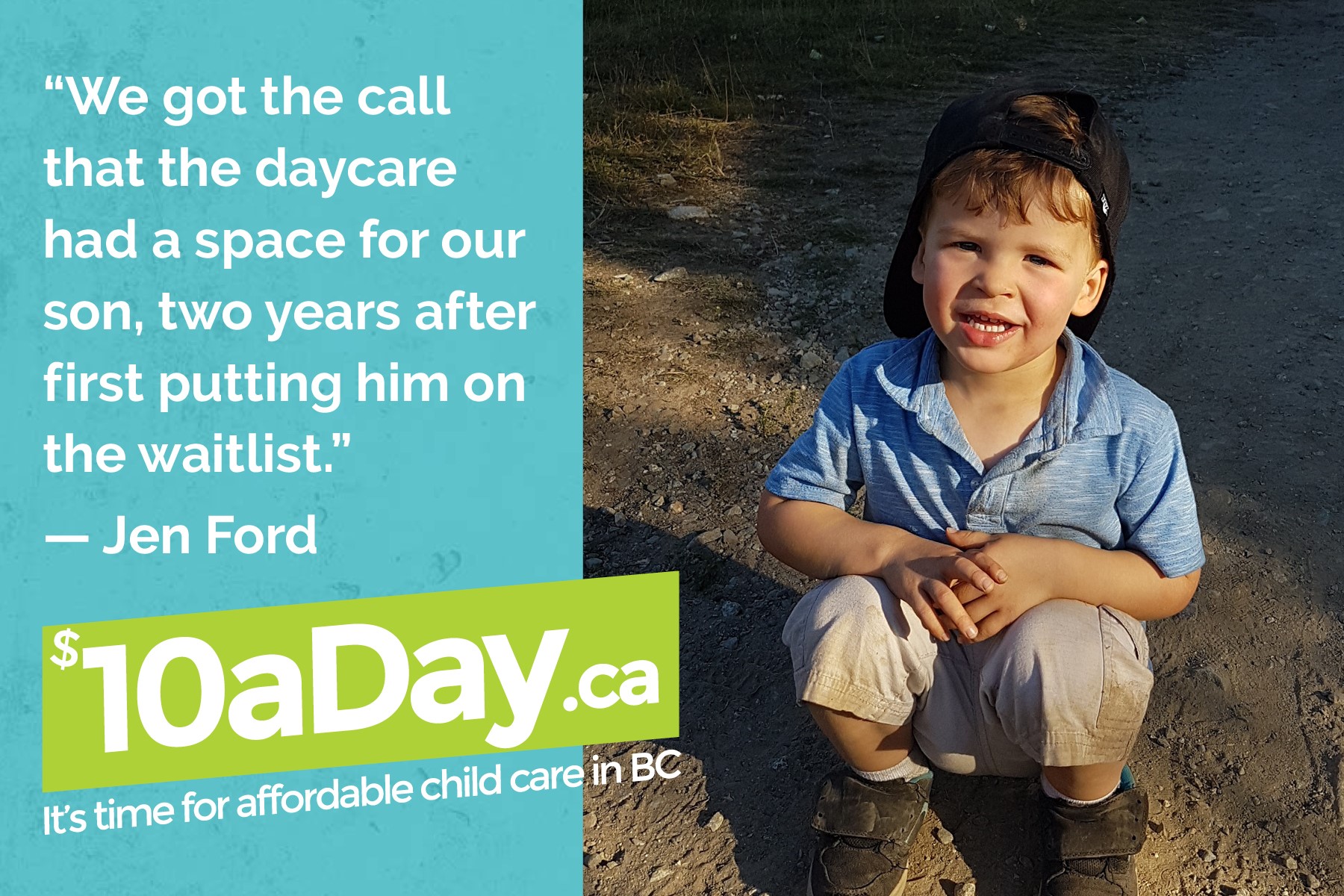 Jen Ford is a member of Whistler City Council, and works as a professional ski patroller on Blackcomb mountain. Jen and her husband, John, welcomed their son, Oliver, in 2013.

Follow us on Twitter  |  Like us on Facebook
@jen_ford on BC's #childcare crisis: "We got the call the daycare had space, 2 yrs after getting on the waitlist"
Jen's Story
It's time for affordable child care in BC. The @10adayplan is the solution to BC’s child care crisis. #bcpoli