How the Fight for Child Care Was Won

$10aDay campaign shows a way to bring change — but the battle isn’t over. 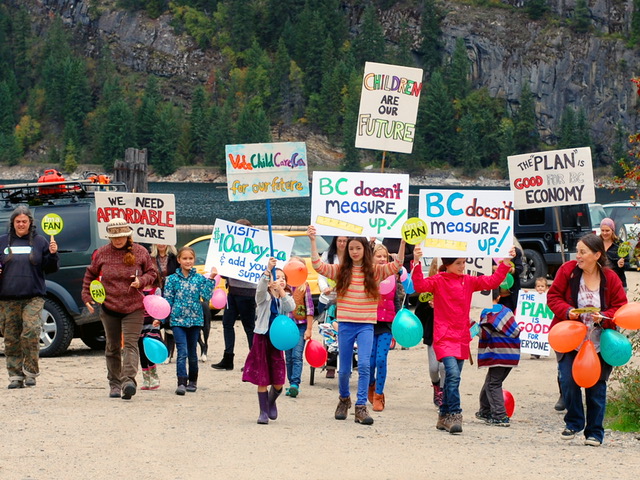 ‘The $10aDay campaign didn’t rely on massive funding. Success came because the child-care crisis across BC is so bad that people know there had to be a better way.’

As 2018 starts and families with young children scramble in the midst of B.C.’s child-care chaos, we’re waiting with hope that Finance Minister Carole James will announce at least $225 million in new spending to improve child care in her February budget.

Make no mistake. If, as expected, significant progress on child care comes in the budget, it will show the success of the $10aDay campaign for a popular, well-researched, realistic solution to the worsening child-care crisis in our province.

The $10aDay campaign is a classic example of how a small group of women, in this case from the Coalition of Child Care Advocates of BC and the Early Childhood Educators of BC, can come together with an idea based on expertise, evidence, lived experience and commitment and, with many allies, make that idea a viable, concrete solution to a current public policy disaster.

Province-wide momentum for $10aDay had been building since its launch in 2011 with a goal of bringing affordable quality child care to the province. Early in the process the campaign team decided to focus all their efforts on the May 2017 provincial election.

We set our goals high. We worked to engage with families across B.C. to ensure that their child-care experiences and concerns were heard. We encouraged all political parties to move child care from the back pages of their platforms to key political commitments. We held energetic stroller brigades where new voices and approaches were shared. We reached out to grandparents who knew their children and grandchildren deserved more.

We kept child care in the news. We expanded our social media reach and engagement. And we sent thousands of messages to politicians calling on them to support, fund and implement the Community Plan for a Public System of Integrated Early Care and Learning — popularly known as the $10aDay plan.

We built an economic case. Economist Iglika Ivanova pointed out that “recent research from Quebec shows that a publicly funded child-care system would be self-financing to a large extent. This is because accessible and affordable child care allows more women with young children to return to work and to work closer to full-time hours. More women working means a stronger economy, with direct benefits to government coffers from higher tax revenues, reduced social assistance for families with children, and lower reliance on other income-tested benefits.”

Economist Robert Fairholm’s analysis found that “full implementation of the $10aDay Plan will have a significant and positive impact on GDP and jobs, and will generate sufficient overall government sector revenues to pay for the additional government spending required to build and operate the system.”

As the campaign spokesperson, I travelled the province speaking with families, early childhood educators, local councillors, decision-makers and the media. Lynell Anderson, our policy researcher, analyzed government budgets, platforms and policies and continued to build the evidence for the $10aDay solution.

We were successful. Child care emerged as a key election issue. The BC NDP and the BC Greens made major platform commitments. In their brief time as government after the election, the BC Liberals also made new child-care commitments.

The province now has a premier, a finance minister, a minister of state for child care and a government that have endorsed the $10aDay child-care plan. Since the election, we have been working hard to make sure that government follows through on its child-care commitment by taking the best first steps to improve access, affordability, quality and the early childhood education workforce in the budget.

Those should include an immediate reduction in monthly fees for families in licensed infant and toddler programs; the first steps in creating 22,500 more licensed non-profit spaces over three years; funding Indigenous-led child care for First Nations; and provide better wages and educational opportunities for early childhood educators.

When those announcements are made it will be because tens of thousands of $10aDay supporters wrote letters and emails to politicians, signed petitions and postcards, spoke to their employers, their unions and local decision-makers, walked in stroller brigades, made donations, talked to media about their personal circumstance, told their neighbours about $10aDay and voted for child care.

The $10aDay campaign didn’t rely on massive funding. Success came because the child-care crisis across B.C. is so bad that people know there had to be a better way. Supporters from every corner of the province made this happen because they needed quality affordable child care in their communities. Parents made signs and marched, unions printed postcards, grandparents signed petitions, we used Facebook, Twitter and Instagram and media highlighted both the growing crisis and the momentum of $10aDay. The success of the $10aDay campaign came from a small central team of volunteers with some minimally paid staff who co-ordinated and strategized. That small team built on decades of advocacy work and lived-experience that galvanized people across the province to support the $10aDay campaign.

This is a historic moment. Yet, our work is far from over. Even with a government committed to building a quality affordable child-care system we know that it will still take time to provide enough licensed spaces for all families who chose to use child care, to educate young women and men to work in child-care programs and to create the necessary infrastructure to support a high quality system.

Now is the time to start. With the right first steps, a system of quality, affordable child care that pays educators a decent wage for the important work they do can be built in B.C. This is how we will advance gender equity and provide the very best start for B.C.’s children.

That means $10aDay still needs your support. Because we haven’t won yet — in fact we’re just beginning.