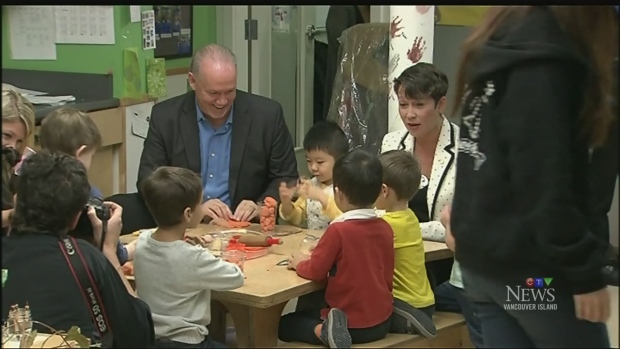 Horgan said child care is the second-highest cost facing B.C. families after housing, and parents in the province are paying some of the highest rates in the country.

He also blasted the Liberal government for “ignoring the child care crisis in British Columbia for the past five years” by failing to invest in affordable daycare.

The $10-per-day plan would not be cheap.

Horgan admitted it could cost as much as $1.5-billion, but he said there’s never been a better time to make such a massive investment.

“We have a surplus budget as a result of the skyrocketing housing revenues that have been coming into the treasury, we have a federal government that is committed to participating,” he said. “The first time in 30 years that a federal government is going to be at the table talking about child care.”

Victoria mother Danielle Davis, who has struggled with finding daycare spaces for her kids ever since she was pregnant, said she welcomes the idea with open arms.

“My child care costs exceed my mortgage,” she said. “[The plan] would relieve some financial burden that we’re feeling and I could start putting some money aside for post-secondary education like most parents hope to do, instead of paying $13,000 a year for one child care spot.”

Horgan said most families with daycare-aged children spend around $1,500 a month on care, but under the NDP’s proposed system, that would drop to around $300.

“Implementing universal child care in B.C. – at an estimated cost of $1.5-billion per year above and beyond our current investment – simply isn’t feasible,” the Ministry of Children and Family Development said in a statement. “That said, we acknowledge the challenges that many parents face when trying to balance raising a family with pursuing work and training opportunities, and we recognize that access to quality child care is an important part of finding that balance.”

The province said it spends hundreds of millions of dollars on child care and has promised to create 13,000 new spaces by 2020.

It also said that any residents who can’t afford child care can take advantage of subsidies for unlicensed care, an option that is only available in British Columbia.