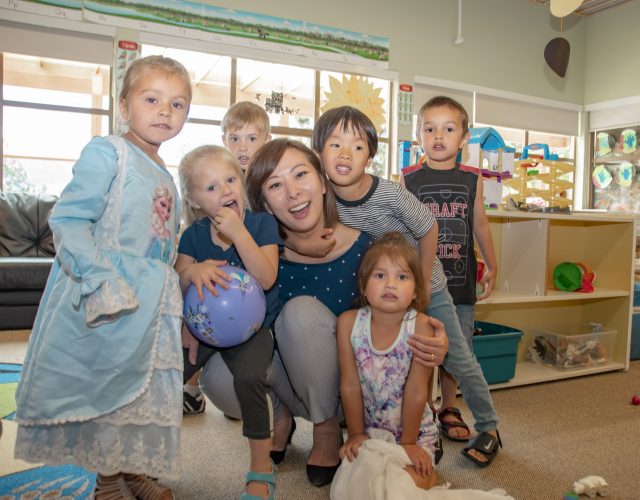 “This is a real example of culturally inclusive childcare and we definitely need more examples like this to make sure our children have the opportunity to connect with their original language, their culture, their traditions,” she said, “because once they reach the public school age – K to 12 – they don’t always have as much opportunity.”

Chen was in the Okanagan for a BCNDP caucus meeting in Osoyoos one day earlier. Coming to the South Okanagan from her home in the Lower Mainland, she said one of the biggest differences between childcare in rural and urban communities is the size of the centres.

“In rural communities families count more on smaller providers, so there’s not as many large centres,” she said. “So there are a lot more family providers in small towns, which we support as well through our plan. And there are fewer licence childcare spaces so we need to make sure we enhance the licenced spaces and provide them support through our local childcare referral centres.”

However, finding a spot at a licenced childcare centre like Inkameep is “very difficult,” she admitted. “I always ask myself, how come childcare and learning was never the province’s top priority?”

Chen said long wait lists are common throughout the province, while at the same time “early childhood educators still struggle with low wages and not being able to make a living with their wages.”

There was $1.3 billion earmarked in this year’s provincial budget for childcare, and the minister hopes that will address the problems.

“This is the first time a provincial government is putting together a comprehensive strategy. So we have over 200 initiatives to support parents, lower fees and create more spaces to accelerate the creation of childcare and early learning opportunities. Also to support the workforce, support the providers, support the staff when it comes to wages, training and nursery programs. We have a lot of work to do but it’s only been a year since we’ve started.”

She said there are about 20,000 B.C. kids in daycare that costs $10 a day or less, and “tens of thousands of families benefiting from having their childcare costs reduced as well.”

Beyond the long-term benefits for each child, Chen said the economy also stands to gain when quality childcare is affordable and accessible.

“Our plan gives parents more options – they can return to work, they can do childcare part time – they have more choices.”

More choice will help the South Okanagan to retain workers, Chen believes. Earlier that day, she heard “that lots of workers are moving away from this town due to the high cost of childcare, and people are looking for job opportunities elsewhere.”

Finally, she dodged a question about how the BCNDP plans on winning the local riding, which has been won by the Liberal Party in every election since it was formed in 2008.

“We want to work together with the local community and local government. That’s the focus of our tour this time.”