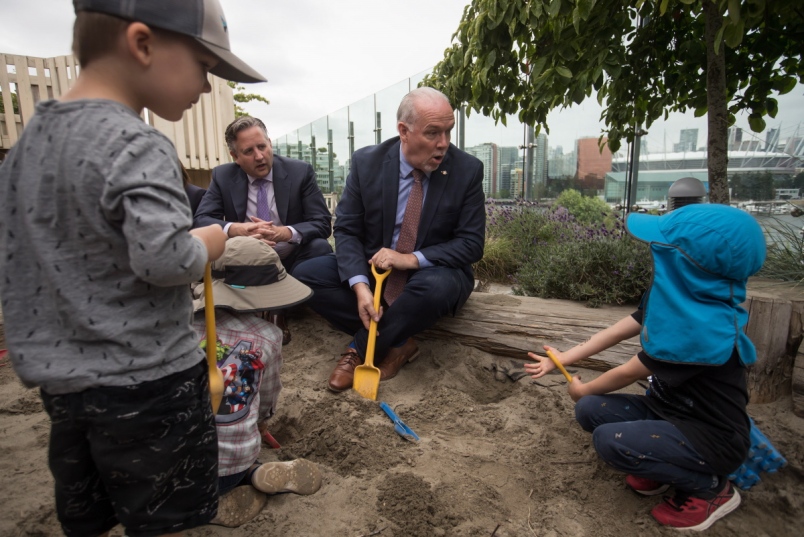 VANCOUVER - Stressed-out Vancouver parents will get some relief knowing 2,300 child care spots will be available in about three years but the city currently has a shortfall of 17,000 spaces, the mayor says.

The British Columbia government is providing $33 million in funding for the licensed spots, which will include a mix of spaces for children under age five, as well as spots for school-age kids.

Mayor Kennedy Stewart said the “crisis” of child care is a topic that comes up at every council meeting because parents are having to make difficult choices as they wait for spots.

“I can't emphasize how important this provincial investment is,” Stewart told a news conference Thursday at a child-care centre alongside Premier John Horgan and Katrina Chen, the province's minister of state for child care.

“We're hoping to get to all of (the spots) in three years but it's finding the space and the partners to do it,” Stewart said of the new spaces as children ran between the politicians before being hustled out for lunch.

Horgan said his government is working to fulfil an election promise of providing $10-a-day care that is currently being tested until next March at 53 facilities across B.C., eight of them in Vancouver.

However, he said universal child care involving the federal government, with participation from all the provinces, is the ultimate answer to a significant need and the issue will be raised at next week's meeting of Canada's premiers in Saskatoon.

“Quebec has led the way here because of a funding arrangement with the federal government, primarily, and we believe that should be available to all provinces and we're going to be talking about it there,” Horgan said.

“The mayor and I know full well that as we get into the season of federal voting I think families and citizens are going to be talking to the federal government, all parties, about getting in the game on this. We need to make sure that the whole country is focused on making sure that our children are getting the care they need.”

Rory Richards, who has 26-month-old twin daughters, said licensed care would have cost up to $5,000 a month in Vancouver so she and her husband opted for a nanny and are still paying twice as much as they do for housing.

“I'd like my children to be socialized with other children and have that benefit that comes along with licensed care,” she said. “The girls are isolated from other children,” she said of Maya and Miriam.

“It's incredibly stressful, it's always lurking on our shoulders as something that could be catastrophic, if for whatever reason we lost the child care we have now,” said Richards, who is vice-president of a modular home company and called herself “an ardent supporter” of the $10-dollar-a-day child care program.

Sharon Gregson, spokeswoman for the Coalition of Child Care Advocates of BC, said two-thirds of the nearly 600,000 children up to age 12 in B.C. don't have access to licensed care because only about 110,000 such facilities exist.

“The problem was that from 2001 until 2017, child care was just left to the marketplace,” Gregson said. “There was zero planning around the province. It was left to whatever private entity, whether it was an entrepreneur or a not-for-profit society that decided they could make a go of child care.”

“We call it chaos because for a family, after their parental leave, they don't know where they're going to turn. They put themselves on numerous waiting lists.”

“We've always said it's going to take 10 years to fix this.”

Child care should be moved to the Ministry of Education, which is the case for most provinces and territories, she said.

“Nobody has solved the problem entirely. Even Quebec, with its affordability, still has got issues with quality because they expanded very quickly.”